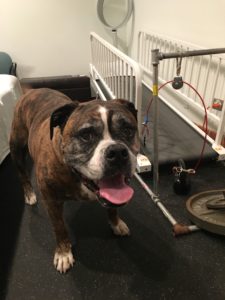 Achilles, an 8 year old bully mix, comes to Arfit for what originally appeared to be a left shoulder strain according to his owner.  A few days ago, Achilles stopped putting weight on his left front limb and would pick it up when he walked.   When he came to therapy, I examined him thoroughly and concluded it was most likely a cervical strain.  I treated his neck and scapular region with soft tissue and joint mobilization, ROM and Cold Laser therapy to his levator scapula and cervical spine.  His owener reports he is now placing more weight on his left again.  I will continue treatment twice per week for a couple weeks until the spasming is resolved. 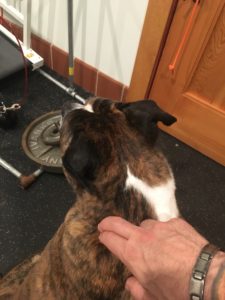